[Also See Bicycle Lane Designs below]
Many photos have links to interesting articles from where they came.

Diversity of a Biking Culture – A Bike for Every Purposes 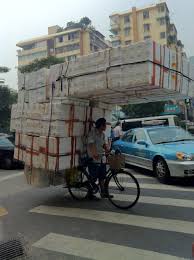 Bike Lane in Center of Street Protected from cars by Landscaping

Laser from Bike Cast Bike Lane on the Road at night that is bright enough for cars to see.