For this reason the City in the past and into the future will continue planning more Commercial and Housing units with no significant plans on how to deal with the consequences of Growth, namely how to move people through our streets to and from Commercial establishments and residential Housing. 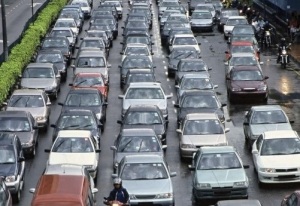 We are already experiencing the consequences of this round many of our school where traffic congestion and hazardous street conditions exists for children biking and walking to school.  As a consequence of such dangerous road conditions parents have resorted to driving their kids to school make a bad situation even worst.  To make matters worst a student was struck and killed by a truck on his way to school last year resulting in more parents driving their kids to school.  Thus gridlock exist twice a day around certain schools as kids are driven to and from these schools.

The new Apple Campus expected to house 13,000 employees is under construction and expected to be completed by 2016.  The Main Street project as broken grown and is expected to open in another year.  There are a few other hotels, office, shopping, and apartment/condo projects underway.  How are we to deal with all this increased traffic especially at the Wolf Road and HW 280 exist where Valco Mall is located and will soon be renovated for more commercial and housing use with the new Apple Campus and Main Street just a few blocks away?  How much further will Stevens Creek Boulivard be congested with all these Commercial/Housing developments popping up along its length?  Without a plan on how to deal with traffic it can only get far worst very fast since all of this development will be completed in the next 3 years.

Another issue that many parents have expressed a concern for is how are our schools to deal with this increase in student enrollment as more housing units are built and more families move into Cupertino to attend our World Class schools?  Cupertino has some of the highest ranked schools in the nation accounting for why so many people desire to live here.  As a consequence housing prices are high and in short supply.  Certain schools are overflowing with students with inadequate classroom facilities to accommodate more.

If you have any qualms about growth and cars vs. growth and bikes then imagine a city without cars where everyone rides bikes, walks, or takes public transportation at the peripheral of the city.  Two way bicycle traffic takes up less than one lane of road.  Bikes can be parked next to sidewalks eliminating parking spaces on both sides of streets.  Parking lots for bikes would be 1/10 to 1/20 of bikes if bikes are stacked as in Europe.  Garages and driveways would be history.  Almost 30% of our city is designed to accommodate cars.  All this space could be utilized for population growth.  That means that Cupertino could easily grow by 15,000 people with the spacious houses we now enjoy.  With high density housing this number could be four time this or 60,000 people.  I only give this examine to illustrate how bicycles could solve our growth issue.  Bikes also consume no energy or emit any pollution.

The Mobility Element of the Community Vision 2040 addresses the need to reduce vehicular traffic resulting for Land Development.  It was intended to offset the consequences of growth by improvements in pedestrian thoroughfares, public transportation alternatives, and bicycles which are the three components needed as alternative to driving cars which are the sole cause of traffic congestion.  Without this key element plans and money will not be allocated for this in anticipation to Commercial and Housing growth.  This oversight Will come to haunt us in the future as street around schools, freeway exits, and major arterial road become increasingly more congested and dangerous to drive, walk or bike. 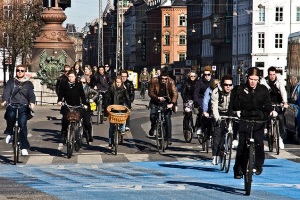 So a major part of the solution is to incorporate Mobility into the General Plan Amendment so that plans can be made ahead of time to deal with all the increases in traffic as a consequence of growth.  An important element of this is to encourage more residents to ride bikes to school and generally around town.  Of the three alternative modes of Mobility: Walking, Biking, and Public Transportation, biking is the most practice for most commutes.  Most people already own a bike and for as little as $150 anyone can buy a bike.  But in order to make this happen the issue of bicycle safety must be seriously addressed.

This website outlines three infrastructure elements that need to be accomplished in order to make biking truly an accepted means of transportation throughout Cupertino to the average citizen:

For Every Bike Ridden one less car is driven – If 1-2% of the predominantly driving population starts regularly biking every year we could have a Growth Sustainable city where traffic will decrease.  Streets would become increasingly safe from cars and free of traffic jams.  If more residents biked to work, school, and/or everyday activities, companies, schools, and merchants could replace parking spaces with more businesses, classrooms, and shops.  Is such growth in the number of people riding their bikes possible.  Absolutely if the city would provide the 3 elements of infrastructure for making it attractive to residents.  All we need it for the number of people cycling around town to exceed population and employment growth which is at around 1% per year.  An annual investment by the city of $10-15 Million a year can make this happen if we focus city expenditures around this a sustainable growth strategy.  See more details about the Vision.

So Bicycling really is the solution to long term Sustainable Growth and cars is its downfall.  There are many benefits to bicycling over driving as well but its overwhelming benefit to our City is Sustainable Growth into the very distant future.  If only our School and Civic Leaders had the Political Will and Vision to set this as a top priority.  But how?

This blog reveals a Vision of the distant future with paths forward that nurtures the transition of Cupertino into a more Bicycle-Oriented Culture by making it Safe, Appealing, and Convenient for the everyday casual and student bicyclist in the foreseeable future.  This blog reveals how Bicycling fosters financial, social, educational, health, and other enhancements to the quality of life.  And you can’t get much Greener or environmentally cleaner than this Vision with zero carbon footprint as well as very little space consuming footprint.

Political Will of our Civic Leaders:
Most Important in making this possible at all is for our City is having a Vision similar to that described on this site to serves as a Beacon for the City to focus all future General Plans, and growth decisions and priorities upon.  Such focus will make possible more cohesive and sustainable long term planing and budgeting in anticipation to growth.  There already is a Community Vision 2040 document but the current General Plan is missing the Mobility Element.  Land Use growth must contain a Mobility plan or transportation will be a mess.  I am suggesting we have a Vision going out to 2090 (75 years).  It can always be revised to adjust for technological advancements but at least let us have the Political Will to set our City’s goals high or we set ourselves up for failure.

Bicycle Culture by Design – A very inspiring YouTube clip about car culture vs. a bike culture.

How Do You Make New York’s Mean Streets A Little Nicer? – Another inspiring video

Google: Cities reducing cars with bikes for more examples of what other cities are doing worldwide.