Highway 85 extends from Highway 101 North near Mountain View at its northern extremity to Highway 101 South in San Jose at its southern extreme.  There is Light Rail located on a section of Hwy 85 in San Jose near Hwy 101 South.  This corridor is about 24 miles long and carries the bulk of traffic along the western part of the South Bay from San Jose to Mountain View.  Long ago there was a plan to eventually bring Light Rail further north along Hwy 85 so there is space between the north and south bound lanes for an extra lane in both directions or so for some sort of transit system.

Currently VTA (Valley Transit Authority) lacks the funds for a Light Rail system along Hwy 85 so they are planning to build an extra toll/carpool lane running on each side of he freeway divide to help alleviate traffic and bring in some revenues.  But they admit this will only provide temporary relief to traffic congestion on this heavily used freeway during morning and evening commutes.  It is likely that all lanes will be again congested 8 years later if not sooner. 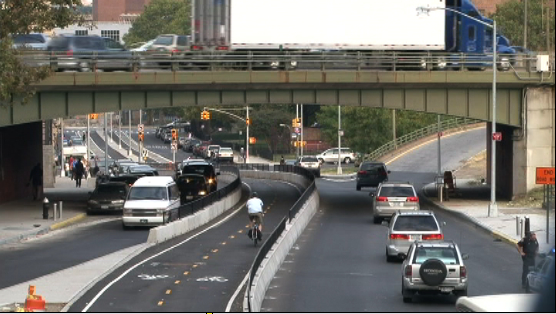 My thought is to place two bicycle lanes in each direction in the middle of the freeway so that people will have the option of riding their bikes along the freeway.  Concrete barriers could separate car traffic from the bicycle lanes.  Bicycle bridges over the freeway with bicycle elevators to carry bicycles and riders from the bike lane up to the bridges could be constructed every couple of mile or so for convenient exit to local streets.  These bicycle bridges would strictly be used for bicycles and bring communities on both sides of the freeway closer together.  The bike lanes themselves would be 2/3 the width of a car lane and made much thinner with much less reinforcement that car lanes making them very inexpensive.  The overall cost would be equal or less than VTA’s current toll/carpool lane proposal and many times lower than mass transit along 85.  This lane would encourage people to use bicycles to commute to and from work and elsewhere.

This would be an ideal bicycle route for people who enjoy bicycle riding because it would be much safer than on streets and quite long (20 miles), uninterrupted, and free of traffic.  It would start at the Light Rail station in south San Jose, and run near Caltran to the north as well as pass through the cities of San Jose, Los Gatos, Campbell, Saratoga, Cupertino, Sunnyvale, Los Altos, and Mountain View making all these communities accessible by a single safe bicycle lane.  Bicycle lane bridge exits would be unobtrusive and could enter many nearby residential neighborhoods not possible with cars making it very convenient for cyclists.

As drivers stuck in traffic see bicycles whiz by them at 10-20 mph during heavy commute hours they will be encouraged to take this very safe, fast, economical, no energy or pollution mode of travel to and from work.  People may also find this a very nice and popular way of getting around the Bay Area on bicycle.  I would expect that with time more and more people will use this bicycle lane to get around rather than drive their car removing more and more cars from Hwy 85 every year as communities grow.  More exits and bicycle bridges can be added later as biking becomes more popular in an area with some of the best weather in the world.  At a leisurely pace of 10 mph one could bike from one end of the bicycle lane in the south near Light Rail to the north end near Caltran in about 2 hours.

This will stimulate cities along this route to improve bicycle lane safety on their streets removing more and more cars off the roads as growth continues throughout this corridor leading to far more sustainable and green growth.  This actually is a long-term sustainable solution to traffic along Hwy 85 and adjoining cities.  If this is successful then this can be expanded to other freeways.

There are so many reasons why riding bicycles is better than driving cars.  It is good exercise, does not pollute the environment, costs almost nothing to do, occupies less than one tenth the space of a car, reduces traffic congestion, greatly reduces road maintenance, is far safer than driving a car, reduces parking space problems, get you to and from work faster than being stuck in car traffic, and is the most affordable mode of transportation.  And you always have the option to drive when you need.  If Light Rail should ever run through this area it will be a simple matter to remove the bike lanes and off ramps.  But I think everyone will see the advantages of this bicycle route and forget about Light Rail or any other transit system.  Biking is the most sustainable, efficient, affordable and flexible mode of transportation.  There are even electrical assist bikes to extend ones range.  I own one.

Light rail can achieve this as well as a Bicycle Express Lane but the bicycle solution probably cost less than 20 time that of light rail to build and would take 3-4 times less time to accomplish with far less disruption to traffic on Hwy 85 during its briefer construction.  And the cost of ongoing operation and maintenance expenses of a bicycle express lane to residents may be a million times cheaper than light rail.  There are no charges to resident for biking the lane, there are few ongoing expenses except perhaps lights at night which would be run from solar cells, and resurfacing of the lane every 10 years or so.  There is really no comparison in terms of costs between the two.  It is also sustainable with growth.

There simply is no cheaper mode of commuting today than by bicycle.  One can afford to buy the best bike available and save far more than buying a cheap car.  No gas, registration fees, smog checks, oil changes, huge tire costs, engine maintenance, and insurance.  Even sidewalks are more expensive to make than asphalt bicycle lanes.  Why do Americans think cars are the only way to get around?  Because gas is so cheap?

Sustainable Bicycle and Smart Growth Advocate
View all posts by Frank Geefay →
This entry was posted in Ideas and tagged bicycle lanes, encourage people to bike, long-term solution, middle of the freeway, sustainable growth, thinner with much less reinforcement. Bookmark the permalink.